Wally Fischer, 54, from Dargaville, was killed in a crash on Monday 17 June 2002 on State Highway 1 near the Mahokine viaduct, north of Hunterville.

Wally was driving, with his wife, Doreen, as a passenger, when a car driven by Anson Ray Kokiri, 22, who was travelling in the opposite direction, collided with them. Wally died at the scene. Doreen suffered a serious brain injury which left her in intensive care. She still suffers the effects of the brain injury today.

Wally’s wife, Doreen, is supporting Road Safety Week: “Wally was my husband and he was taken away from me by a driver taking risks and not thinking about the consequences. Please don’t take risks on our roads, keep yourself and others safe.” 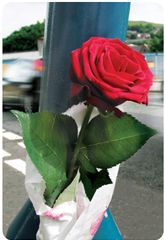